In our previews of the new year for the Bonellian heroes, it’s time for Nathan Never. What sci-fi adventure will 2018 have in store for our Alfa Agent? Read on to find out about it! 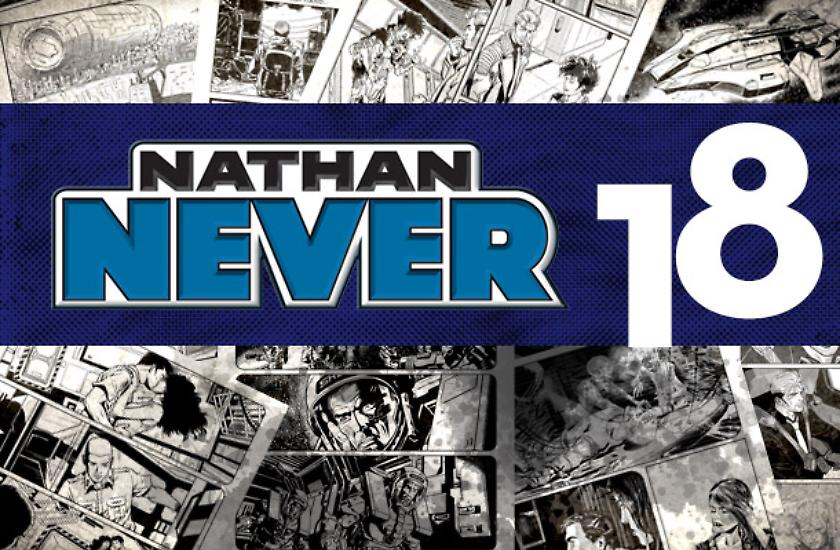 By Glauco Guardigli and Antonio Serra

In Nathan's regular series, Bepi Vigna offers us a two-part story, entrusted to the skillful "brushes" of Sergio Giardo: "Sugli asteroidi" and "Missione per un amico". It's an important story, that will take us back to the times when Nathan Never was a cadet in the Space Troopers, when he met his wife Laura and his best friend was Randy Nash (you all remember "L'ultima onda", right?)

In 2018 you will also be able to read: a story by Giovanni Eccher with art by Pietro Vitrano - in a convincing debut on Nathan's pages - about a mysterious serial killer endowed with superhuman powers and similar to the British folk character Spring-Heeled Jack; a disquieting story by Michele Medda and Elena Pianta about alien abductions; another story with art by a sought-after Elena Pianta, written by Alberto Ostini... As you can see, there will be much to taste, while we wait for the new sensational saga by Medda & Vigna, that will appear in 2019!

But that's not all, because there are worthy news our "one-off" volumes and albums, as well. In April, we will publish the 15th Maxi Nathan Never, an album with a generous amount of pages and a complete story, almost 300 pages long. It will be the debut of Antonio Zamberletti, a prolific author for Dampyr and Zagor, and a well-known writer of Italian "polars" (that's the word the French use for the "action-police story", and we can guarantee that Zamberletti knows what he's talking about, also thanks to his experience in the police forces). We won't reveal too much about this adventure, but we can tell you that the story gave the artist, Maurizio Gradin, the chance to create a lot of submarines, tanks and flying machines dating back to WWII... And it's not a story about time-traveling!

May will be the month for a painful double farewell, although it was expected: it will be the end of the journey for the Esp Files by Marla Reyes and Herbert Loomis and, with them, for the Universo Alfa series, after eleven years of honorable service. Written by Davide Rigamonti and Giovanni Gualdoni, with art by the outstanding Ivan Fiorelli, the last episode will see the two chiefs of the one-of-a-kind investigative section in Deep Eden uncover other rotten things in that self-appointed paradise, particularly in the school system and in the way the new generations are raised.

As for Agenzia Alfa, in 2018 we'll have two volumes at your newsstands. One came out in January, with two stories that will allow our readers to revisit the dramatic consequences of the never-forgotten War against the Orbiting Stations. After this plunge into the past, the next Agenzia Alfa in June will offer two stories again: in the first, we will know a little bit more about Legs Weaver and her relationship with Tanya, the walkyria; in the second, we'll be taken to a distant future, where we'll witness the finale of the long saga centered around Kay, the young mutated girl that Branko & May adopted. She had been the heroine of other adventures in different time-spaces already.

In May, as in the last two years, it will be time for a new miniseries starring Nathan Never. Created by Antonio Serra and written by Giovanni Eccher and Adriano Barone, this new take on the origins of our special agent Alfa will allow the readers to discover new worlds and dimensions, in an extended overview that will follow the lives of several characters, and at the same time the history of sci-fi comics!

That's not all with our news, but you'll have to wait, for now... Nathan Never and our authors have many other ideas in store and, hopefully, they will surprise you again!