Our long list of 2018 previews continues with the new label that will make its official debut this Spring. What can we expect from "Audace"? Let's hear it from Our editor-in-chief Michele Masiero. 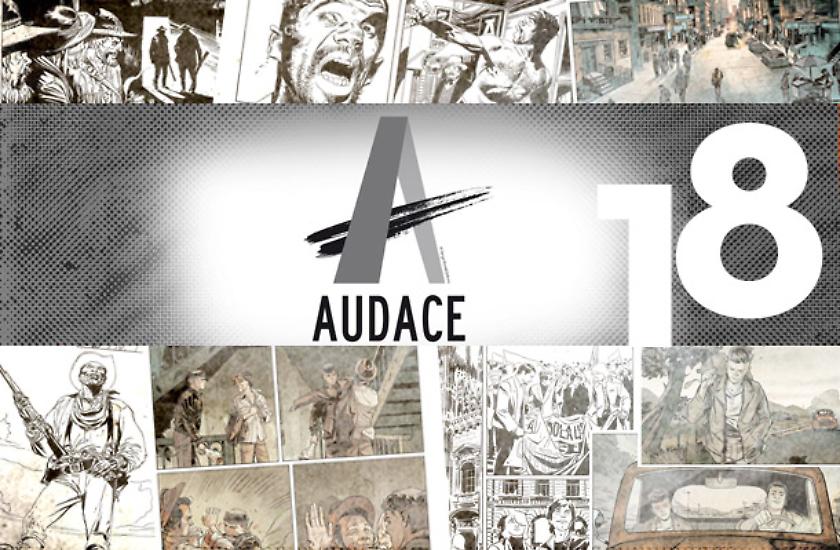 Audace is an "umbrella" under which we will create project with narrative characteristics that will be more "grown-up", a new angle of the traditional "Bonellity".

We talked about Audace for the first time in the latest edition of Lucca Comics. Audace is not a series, but a label, an "umbrella" under which we will create project with narrative characteristics that will be more "grown-up" in comparison with the usual habits of our Publishing House. For us, it will be a new language, a new angle of the traditional "Bonellity", with an eye to an increasingly more sophisticated public and a medium-short duration. You had the chance of a first taste of this different way of comic narration in Lucca, with the debut of the volume Dragonero Senzanima, the precursor of a series that will come soon to your newsstands and bookshops.

As for Senzanima, also the first official issue of our Audace label will debut in the bookshop-volume format, and it will be reissued as a newsstand album later. On the 50th anniversary of the student rebellions of 1968, in May we will publish the first volume of Cani sciolti - with the title "Sessantotto" - that will contain the two first episodes of the series created and written by Gianfranco Manfredi. The entire series will be at your newsstands starting from next October. Cani sciolti is the story of a group of friends who are at the university of Milan in 1968 and become involved in the rebellious atmosphere of the period. We will follow the main characters until the 1980s, in a narration that jumps in time and space between Italy, Europe and the world, including the Chilean golpe of 1973. This is the first real venture of Bonelli into the events of the recent Italian history. The intention, though, is not to present a didactic series of  events, but to follow the characters' everyday life, to understand how a fast-changing world had changed them. The characters design and the art for the first two episodes are by Luca Casalanguida.

Joe R. Lansdale took inspiration from real life Nat Love - a Black cowboy and gunslinger whoi was nicknamed Deadwood Dick and made him the leading character in several of his short stories.

At your newsstands, in summer, it will be time for Deadwood Dick. The American writer, Joe R. Lansdale, took inspiration from a real life Black cowboy and gunslinger, Nat Love, who lived right after the Civil War. Nicknamed "Deadwood Dick" like many other Wild West heroes, Nat is the leading character in several Lansdale stories. We made an adaptation for seven comic albums from the short stories "Soldierin'" and "Hide and Horns" and the novella "Black Hat Jack", entrusting them to three of the top artists of our Publishing House: Corrado Mastantuono, Pasquale Frisenda and Stefano Andreucci. The writers are Michele Masiero, Maurizio Colombo and Mauro Boselli. Of course, in Deadwood Dick we will find a hard and dirty West, in the classic Lansdale-style, so be ready for a tough series!

The third offer of our Audace label will debut in autumn. Mister No Revolution will present a unprecedented version of Jerry Drake, an "experiment" carried out on the flesh of the character created by Nolitta. The idea is by Michele Masiero, with amazing art by Matteo Cremona and Alessio Avallone and evocative colors by Giovanna Niro, Alessia Pastorello, Luca Saponti and Stefania Aquaro. We won't share anything more than that about this project, to avoid spoiling your surprise! The new Jerry Drake will be unveiled at Lucca 2018. Save the date!

The news about our Audace label won't end here. There are many titles underway, but we cannot give you an exact time for their publishing yet: from the new adventures of Magnus' "Sconosciuto", to the cross-medial project by Mauro Uzzeo & Giovanni Masi, "Il confine", and "Darwin", "10 ottobre" and "K-11". But we will talk again about all that later on...