How many Stories has this 2018 in store for us, although it began just a few weeks ago? The editor of our "Le Storie" series, Gianmaria Contro, will tell us in detail. But not too much - some Stories are tastier if you uncover them little by little... 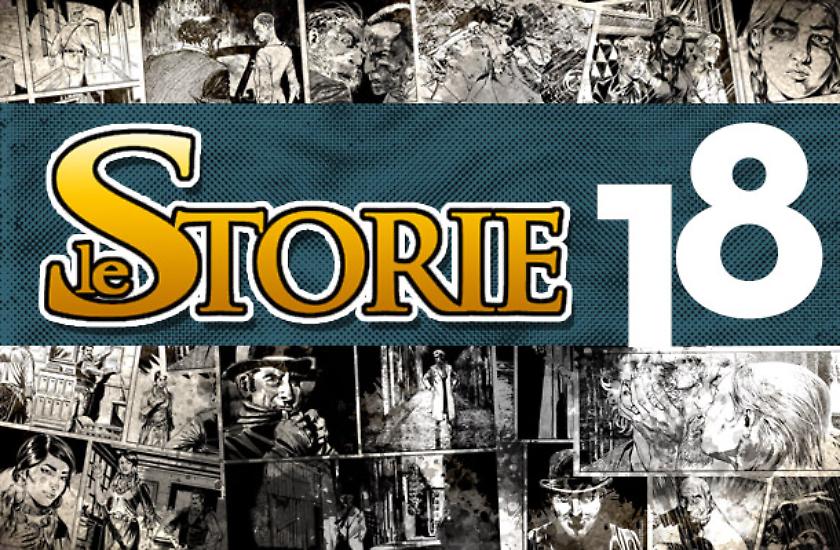 Strange to say but, almost like the biblical "thief in the night," the new year always comes unexpectedly. It feels like we were saying goodbye to 2017 a minute ago, with "Il cuore di Lombroso" by Barzi & De Stena, in December... And here we are, in the second half of January 2018, with an album (and not an ordinary one!) already published and many others who are knocking on our door, anxious to take the stage.

As you have already seen, the new year opened under the sign of variation (a real "trademark" of our series): we span from the Greek antiquity by De Nardo and Riccadonna to the Cosmic Horror of Friedl & Nucci, with excellent art by Stevan Subic... What’s next? What’s waiting for us in February? First, the comeback of a late and beloved author, the great Paolo Morales, who passed away in 2013. Paolo left us a legacy of a few treasured scripts, which have been transposed into comic books and are now ready for our readers. The art of the first story - a venture into the Sergio Leone-style western - has been created by a promising newcomer, Fabio D'Agata. The second story, set at the time of the Renaissance in Venice, boasts the skillful drawings by Stefano Voltolini, an artist who has been very busy outside of the Bonellian world but is at his debut on Le Storie.

After April, we begin the journey that will take us from the spring warmth to the hot summer days. From May to July, a gang of new and brand-new authors will keep us company on this trip. But we will take the liberty to reveal their names later on only, to introduce the new faces properly. Let’s just say that all kind of things will happen in those three months: we will go from the tumultuous days of the South-African apartheid to the mysteries of science in the 18th century. And then, we will experience an adrenaline-filled, contemporary thriller-noir... What about August? You’ll have a surprise that will be a real treat for the lovers of the Great Adventure by Bonelli and... Well, we’ve just said it will be a surprise.

Still talking about surprises, have no fear: we did not forget about the Speciale in full color, that usually comes to your newsstands in July... You may find it hard to believe, but in this 2018 we have two enticing and juicy candidates for it, and we haven’t yet made our choice! To find out more, please stay tuned. When we solve this puzzling question, you’ll be the first to know.

As for the remainder of the year... we’d have some many things more to tell you about, with stories that are set in different times and span all the twists and turns of imagination. We’ll go from Medieval legends to futuristic nightmares, everyday life, and historical dystopia. But we are saying too much, now, decidedly. We'll leave you with your curiosity unsatisfied (and a sadistic grin on our faces...), but we can promise that we will reward your wait with plenty of enthralling, gripping and unforgettable Stories.