In this 2018 that has just begun, what unbelievable surprises will the Spirit-with-the-Hatchet have in store for his readers? The series’ editor, Moreno Burattini, will give us a preview of some of them, shedding at the same time a cloak of mystery on the others! 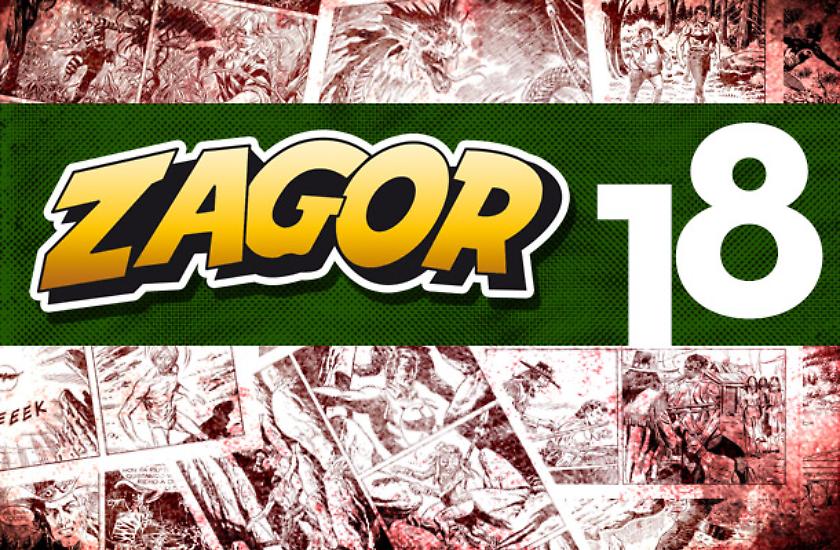 We will start NOT giving you a surprise preview. We won't reveal, that is, what will happen in March 2018, when in Zagor's world (but also someplace out of it) something unexpected and, hopefully, very exciting will happen. Whatever that might be, we will talk about it later on. Of course, other surprises of various kinds are in store for us along the year. If you are alert and accurate readers, you may have already discovered the first one, in the final pages of the January issue where the return of Smirnoff ends. In those last pages, we found out that the diabolical Duke was a puppet in the hands of... again, we won't tell, not to reveal too much to those who haven't read that story yet. And that story was the prelude to another comeback - this time, it's the turn of a lady bandit, Blondie.

Starting from September, our Darkwood hero will have to face not one, but two old enemies who have joined forces against him. Who are they?

The amazing cover by Alessandro Piccinelli (who has already shown his talent also to the very few early skeptics) of the February album will recall memories of the first advent of the blonde criminal. She starred in a 1977 story written by Guido Nolitta & Decio Canzio, with art by Franco Donatelli & Francesco Gamba. An unforgettable classic, with a cover by Gallieno Ferri where the busty gunwoman punches the Spirit-with-the-Hatchet right in his face. Blondie's return will allow us to learn her real name and the tragic secret hidden in her past.

In between spring and summer, we will witness the dramatic events in the life of Ramath, the fakir mysteriously vanished from the "Golden Baby" and frantically searched for by Captain Fishleg and his crew. But also by Zagor who will fight to rescue his friend more than anybody else, since Ramath's life is threatened by mysterious necromantic forces. Starting from September, our Darkwood hero will have to face not one, but two old enemies who have joined forces against him. Who are they? Well, one is an ancient adversary, who made his appearance at the time of the Zagor strips... but also the other, although 20 years younger, belongs to the ranks of the "venerable" villains. None of them had ever made their comeback until now, and they resurface together. It will be fun to see if anyone of you had guessed who they were.

Our Speciale, published as usual in March, will be called "Le creature del buio" and will talk about the mysterious dwellers of the woods. They are the characters in the legends of the lumberjacks, known as "fearsome critters" - some of them are harmless, but others are really dangerous, as true monsters lying in ambush behind the trees.

Our Maxi Zagor "I racconti di Darkwood," published in September 2017, seems to have had an extraordinary success. So, we are preparing another one with the same formula that you seem to have liked: it will be published next year, in January 2019. In 2018, otherwise, the three Maxis of the year will be "special" for another reason: they will tell a journey of the Spirit-with-the-Hatchet outside the Darkwood Forest. Our hero is not new to this kind of wanderings: we have seen him leaving for Africa or South America, just to name a couple. This time, we will not follow his travels on the albums of the regular series, but on three stints on our four-monthly “whales” (while everything will go on as usual in the Zenith series). In "Terre fredde" we'll see Zagor landing on the West Coast, on the Canadian border, while in the next two Maxis we will follow his peregrinations on other sites on the Pacific Coast. In these three stops, there will be the return of enemies and friends that our readers often asked to see again. The spring Maxi, for instance, will bring back on the limelight Prince Alexis, the leading character in the unforgettable classic "Agli ordini dello Zar," written by Nolitta.

You'll be happy to know that in 2018 we will publish two Zagor volumes, to be sold in bookshops and comic-book shops.

Another exciting event will be the arrival at your newsstands, probably in November, of another team-up (after the one with Dragonero). This time around, Zagor will join Brad Barron in the fight against the Morbs that invaded his forest. As you may know, several years ago Brad Barron was the hero of a Bonellian miniseries, that went on also in a few riveting Speciali. Barron, a U.S. Army soldier, fought alien invaders from outer space. The creator of the saga, Tito Faraci, took on the task of writing the joint adventure featuring Zagor and his character, in a breathtaking story set in Darkwood and contained in the winter Color album. Tito, who has recently received plenty of praise for his “Cico a spasso nel tempo,” worked at this new venture with Walter Venturi. The summer Color, for its part, will arise the readers' interest with a story starring Wandering Fitzy, Zagor's charismatic mentor!

Finally, you'll be happy to know that in 2018 we will publish two Zagor volumes, to be sold in bookshops and comic-book shops. In mid-February, a hard-cover book will offer - in full color and a large format - the adventure of "L'inferno dei vivi," while a huge soft-cover volume will allow you to read the first complete adventure with Kandrax the Magician again. We will give you notice in advance when it will be time to look for these books!