Second stop per our journey in the colorful 2018 of Sergio Bonelli Editore. This time, it's Dragonero's turn! His fantasy world will be devastated by the Black Queens Saga, and that's not all! 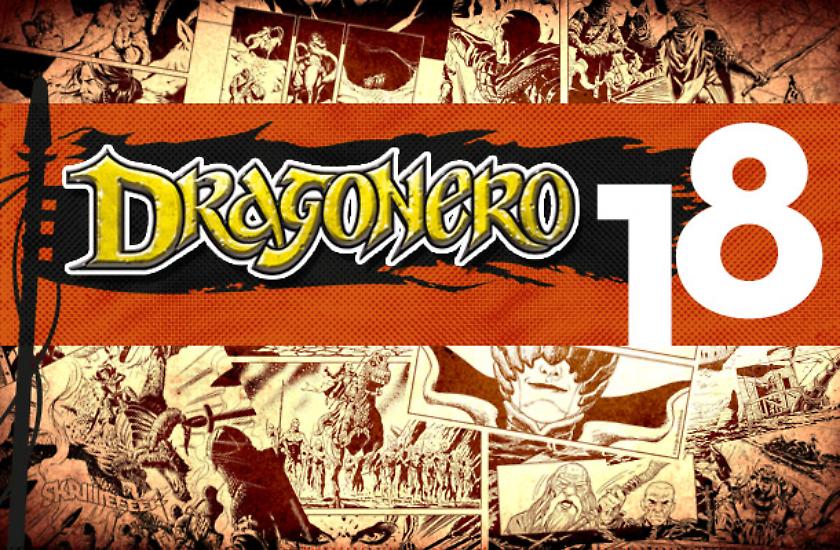 Dragonero's 2017 ended with an iconic image: Ian's and his sister, Myrva's, faces staring astounded at a long-feared threat becoming a reality, suddenly and devastatingly - the invasion by the Black Queens!

For our hero, 2018 will start again from that scene, on the top of the Tectuendàrt High Tower, in a strict continuity, as if it were the same album. And that will be true also for all the albums of this Saga. From now on, the events will carry on at a breakneck pace, relentlessly and without a moment of rest for our readers. And, frankly, there will be no haven for anybody, because the blades of the Black Elves can hit anyone in the Erondàr.

For Dragonero, 2018 will open under the sign of the long-awaited Black Queens Saga, that will accompany us for eight months; many things are destined to change along this lengthy narrative arc, starting with the new cover graphic. During all the Saga, the Queens' black flag will wave on the cover, and a new column will introduce our stories. That's without taking into account a series of notable deaths, of course. Important characters in our continuity will perish, while the political balance of the Empire will be disrupted by the devastation.

The war will last for eight months, a time that will appear very short, due to the reckless pace of the events.

The war will last for eight months, a time that will appear very short, due to the reckless pace of the events: a lightning-quick chess game, where the first move will go to Stefano Vietti & Giancarlo Olivares with the January issue, about the beginning of the invasion and the hard strike against the Empire's capital city. Luca Enoch & Giuseppe De Luca will make the next move in February, telling the tale of the many fights that follow Vàhlendàrt's Battle. A particularly tragic and painful time, among the many events of the war, will come in March, with art by Francesco Rizzato and texts by Stefano Vietti. In the following months, the art by Antonella Platano (April) and Fabio Babich (May) will depict the fledgling reaction of the Imperial troops and their allies.

In June, an epoch-making event will come like a storm on the series: the first Dragonero story written and drawn by Luca Enoch! It will be an episode that the series' fans do not want to miss, of course. In July, Stefano Vietti & Gianluca Pagliarani will realize another great exploit: they will tell an entire day of battle, unfurling an hour after another in the pages of a single album! The Saga will end in August (but we won't spoil the finale for you, don't worry!) with the same artist that started it, Giancarlo Olivares; the episode, this time, will be written by Luca Enoch. So, we closed the circle: Vietti will start the fire in January, Enoch will smother it in August, and Olivares will ensure the continuity between those two moments with his dynamic and elegant art.

After the summer break, you'll find a very different Erondàr, and Stefano Vietti & Alessandro Bignamini will have the task to show you how much it changed. A double story written by Vietti with art by Luca Malisan & Francesco Rizzato will accompany our readers through the autumn months, while in December your "hosts" will be Luca Enoch & Riccardo Latina.

Our summer Speciale will feature Stefano Vietti and Gianluca Gugliotta, with Piky Hamilton's exciting colors, who will illustrate how spectacular can be the fights against the huge and powerful trolls.

In 2018, Dragonero's books will double down: our usual autumn volume (where Paolo Francescutto will enhance with colors the tenebrous pages of the double story "Il contagio" and "L'agonia di Yastrad" by Gianluigi Gregorini) will be joined by a deluxe version of the Speciali and Magazine stories, that many readers may have missed, with plenty of articles and dossiers about Dragonero's world... A first step towards the Encyclopaedia that many fans of our Scout and his companions have requested. The new adventure will begin with "Oltre i confini dell'Erondàr," a story originally published in the first Dragonero Magazine. We take this opportunity to mention the new Magazine 2018: it will come up in November, just like in 2017, with our usual series of dossiers about the world of Fantasy.

About the series outside of the regular albums, Dragonero Adventures and Senzanima, we will talk in the previews dedicated to the new "Young" line of Sergio Bonelli Editore and the brand-new Audace line.