To the roots of Tex

Our Ranger is once again in the limelight, in the next two months of our publications, with stories looking at the past of our hero and an important tribute to his visual creator: the unforgettable Galep, in his 100th anniversary! 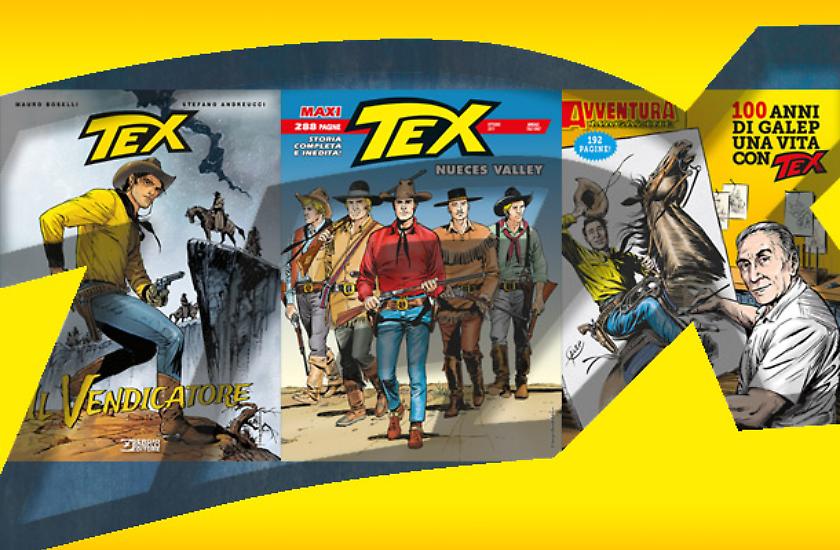 It’s no use to beat about the bush too much: there’s a hero who secured his unshakable role at the core of the world of Italian comics, and can look down at the other characters from his almost 70 years of history: and this her’s name is… Tex! While we are waiting for his 70th anniversary to adequately celebrate it (2018, dear readers and fans of the Ranger, will have great surprises in store for you!), in Tex’s stories for the next two months the authors will turn to the past of the character. On the monthly series, it will be the end for the diptych about the comeback of Lupe. This character appeared for the first time on a strip that you’ll be able to read in September, on issues 15 (Il covo sulla sierra) and 16 (Tex alla riscossa) of our Tex Classic. A very fortunate coincidence! On the pages of Maxi n.21, we’ll see the return of many old leading characters, spanning from Jim Bridger to Sam Willer. In the spectacular hard-cover, full-color album Mauro Boselli and Stefano Andreucci will tell again, just like in the recent Texone n.32, an adventure of a young Tex Willer,  an outlaw on the run in the territories beyond the Rio Grande, hunted by bounty hunters and corrupted sheriffs.

Also, you don’t want to miss the huge Avventura Magazine: this volume, with the title “100 anni di Galep – Una vita con Tex”, is a celebration of Galep’s centenary, with a very classic Ranger story (“Silver Bell”, here in full color), Occhio Cupo’s first adventure (this hero, created in 1948 by G.L. Bonelli, occupied Galep during the day; at the time, he used to work on the art for Tex at night!); and the twelve exceptional pages of the unfinished comic reduction of Kipling’s “The Jungle Book”, written by Marcello Serra for the ink of the Master from Casale di Pari. All this, with a narration of the extraordinary career of our unforgettable Galep.

Among our other events in September and October, we’d like to highlight the final issues of Martin Mystère’s saga Le Nuove Avventure a Colori, and the suprising “half-season finale” of Orfani: Sam; the end of two miniseries, Nathan Never Rinascita and Cico a spasso nel tempo; Storie da Altrove n.20 and Speciale Dylan Dog n.31, that will be centered around the Pianeta dei Morti again.

Then, it will be time for our Maxis, with the 31st Maxi Zagor: here, several writers and artists who will work on the Spirit-with-the-Hatchet for the first time will offer an unusual take on the classic hero by Nolitta & Ferri and Darkwood’s world; other two “whales” will come also for Nathan Never (Maxi n.14) and Dylan Dog (Maxi n.31, this time in the “Old Boy” version).

If you want to know something more about this and the other albums of the next two months, please start leafing through our new edition of Giornale di Sergio Bonelli Editore Online!