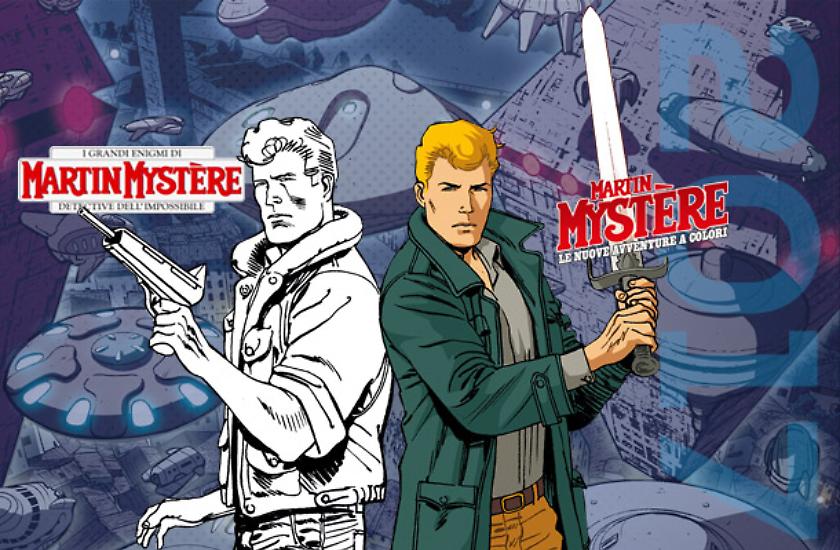 "MIDWAY IN THE JOURNEY OF OUR LIFE..."

Martin Mystère will turn 35 in 2017, that's why we couldn't avoid thinking about the first line of Dante Alighieri's Divine Comedy. An age of 35 marked (in the medieval thought) the first half of human life. Unlike the Divine Poet, Martin won't plunge into the depths of Hell, or visit Heaven and Purgatory. But his "Infernal Demons" will always go with him, and he'll meet all kind of troubles in vivid colors (as in the "parallel series" in full color with our Youn Uncle Zio Marty. We warmly suggest you, if you're not already doing it, to follow it. But in a little while, Giovanni Gualdoni will tell you something more about this).

We start from February, with an "eco-friendly" story, where we'll meet the legendary "Green Man" in person. April will be the month of a prestigious goal: the 350th issue (by Castelli & Grimaldi) will come out right at the time of Martin's 35th birthday. Just a coincidence? Our Good Old Uncle Alfredo (Castelli) swears that he planned this since a distant day in 1982 when the Detective of the Impossible poked his head out of your newsstands for the first time. Is that true? It's a Mystery!

Then, we'll have a new adventure about "Hamelin's vanished people," and summer will be the time for a special story written by Beretta with art by Alessandrini and Esposito Bros. At the end of the year, we will receive a nice Christmas present: a new "extraordinary" episode, where Martin will be tackling a Sherlock Holmes unpublished adventure!

But the one-off albums will abound, as well. Our usual Summer Speciale will celebrate the 35th anniversary of GOUM in a decidedly unusual way (with a comeback of the "1930s world”, by Castelli & Alessandrini, also). What about "Storie da Altrove"? Here, the series reaches a small goal of its own, with n.20. We will celebrate it by going "back to the origin." Recagno & Sforza will take us back to the 18th century, where the founders of the mysterious secret base will have to solve an enigma connected to George Washington, no less.

Surprises don't end here, of course, but we will tell you about it in due time. Until the next 35 years!

35 years after the birth of Martin Mystère, created by the brilliant, visionary mind of Alfredo Castelli in 1982, in 2017 our Detective of the Impossible will double down at your newsstands, with the Nuove Avventure a Colori. After a preview launch at the last Lucca Comics & Games, this new miniseries, conceived as a 12-chapter novel, ended its first narrative cycle in January. While the first part centered around Atlantis and Mu, in February we will begin the Men-in-Black cycle.

New enemies and new deadly threats are waiting for Martin Mystère in the next months. And first, he will go mano a mano against his oldest enemies, who have been responsible in the past of his parents' death and forced him to leave his career as the Detective of the Impossible. Now Valentina Ventura, a daring blogger, inherited Martin's title. Our hero will have to ally with her and plunge into a riveting treasure hunt: starting with a lost note, written by Goffredo Mameli, they might unveil a worldwide conspiracy with deep roots back in space and time. And from deep space, a fleet of UFO is coming towards the Earth, with unknown purposes that may link to events still to come...