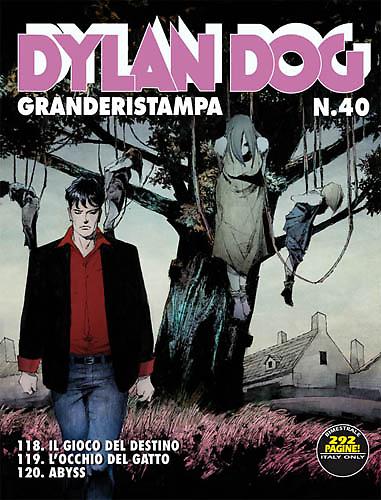 Introduction: Fate's shining blade, the return of Cagliostro, an ocean of rage and pain…

The night of horror… Aileen Ward would like to get the scoop of her life: taking a photo of a ghost in the company of Dylan Dog. Together they set off for a sinister nocturnal itinerary, along the roads of death… But something is following them. It’s the glinting blade of destiny, a destiny that sews and cuts the threads of existence, and which wears the mask of a crazed killer, ever ready to start the match, because he knows he’s got the winning cards!

Cagliostro the cat has come back, and with him the shadow of the witches has returned too. What’s required is his feline flair, a sudden pounce with his paws to snatch an intricate web of facts. Lady De Bourgh murdered in her bed, poor Bruce tormented by warning dreams, the legend of an ancient tree under a curse… A kaleidoscope of characters and mysteries caught up in a whirl that falls… into the cat’s eye!

A writhing maelstrom of deep black oceans. Like night, or a dream of death… Something is swimming up through icy waters and years of oblivion, the white hand of a drowned person that grabs swimmers’ ankles. There’s a voice down there, the voice and wails of a little girl resounding in the wreck of a great ship. She has a story of pain and sorrow to tell and an infinite rage is burning in her eyes!