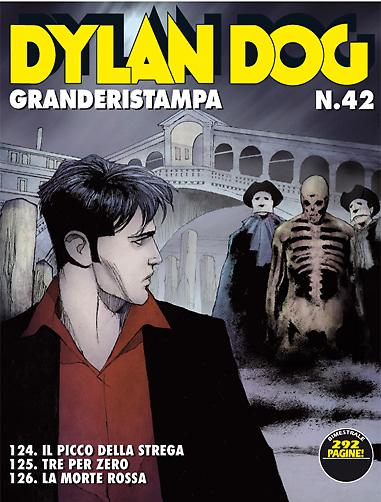 Introduction: The secrets of Witch Peak, a catastrophical maths paradox and the image of the Plague!...

Three girls vanished into thin air, and, all of a sudden, Darkness becomes the center of the universe. A village forgotten amid the woods of Cornwall has found its sinister glory thanks to Witch Peak, a pinnacle of rock surrounded by evil forces. Around Witch Peak murders take place, there are perverted fantasies, trickery and disappearances. But truth gets lost in the cracks of stone, like the whisper of the wind…

The beating of a butterfly’s wings can cause a hurricane, as everyone knows. But how do economic crises arise? Through a spark, a chance coincidence, a whim of destiny, which grows until it is a veritable monster. To stop it, Dylan Dog has to seize it by the tail, proceeding backwards in time and rewinding the ribbon of events in a giddy pirouette of absurdities…

The plague is walking among men, and men are falling into the dust. Centuries ago, the artist Jacopo da Verona depicted its image, grasped its essence, and now his picture is the carrier of lethal contagion. Dylan Dog is hunting down the most terrible of nightmares, along the roads and canals of Venice. A desperate chase, because the prey is invisible…